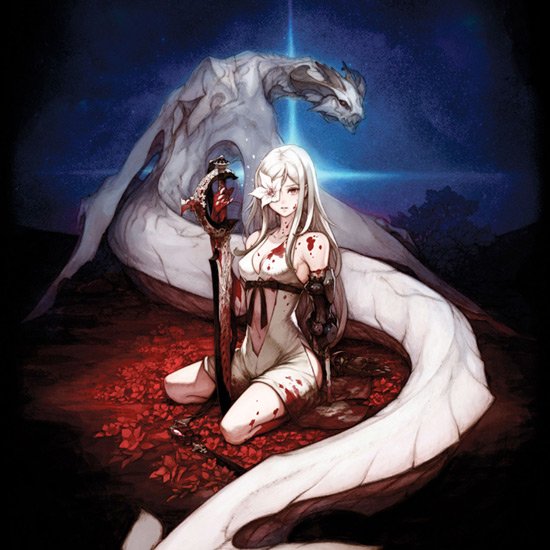 With Drakengard 3 out next week in North America, I thought it’d be a good time to connect with MoNACA studios founder Keiichi Okabe about his work on the project. After being amazed by their score for NieR, I wondered what they would have in store for fans upon returning to that same universe.

They don’t disappoint, as you can read in our review of the score.

See what Keiichi Okabe has to say below.

On revisiting the universe of NieR and overall direction

I was surprised to hear that Drakengard would come back as a game altogether. Even more, the fact that they would come to my team to ask to create the music, was something that truly surprised me.

On vocalist Emi Evans and highlighting other vocalists

There are several Intoners [translator note: special beings, usually women, who have supernatural powers that they control through their singing] that appear within the story of Drakengard 3, and each of the different characteristics are strongly depicted. Music-wise, to express the previously-mentioned sense of contrast, we asked various vocalists with different characteristics to sing.
Among them, Emi’s songs primarily handle the parts that involve evoking a quiet and sad atmosphere, much like that of NieR.

On Drakengard 3’s emphasis on action

I feel that more and more recent music for videogames are used much like accompaniment tracks in a theatrical movie, in which the track itself builds up various emotions. When creating music for NieR, I wanted to do something different from that, and so I took on the challenge to depict the poignancy and sadness with a melody.

Because “singing” is a major element this time as well, and because our creation process heavily centered on melody, I think the songs ended up much like NieR in that the melody is what makes the song.
Also, having multiple songs with the same melody motif leads to deeply impressing the melody in to those who listen.

On the rock/electronic variations of the game’s themes

「15 Nightmares ~」is a collection of background music from NieR DLC content. The director, Mr. Yoko said that the main story of NieR was beautiful and sad throughout but wanted it to be rougher in the DLC, so that’s why we chose that kind of direction [which can be heard in the album].

It was similar with this game also; there was a request for each stage and boss battle to have their individual variations in its color, so to speak. Especially with the boss battle, he requested to include heavily distorted guitar sounds.

Therefore, I thought we could express the sense of contrast between the basic orchestra sound of that stage if we were to include an electronic element rather than just a normal rock-and-roll sound, and that’s how we got to the direction it’s in with this game.

In terms of composers, I am the primary one making songs, but my associate from the same MoNACA group, Ishihama, continues work on the team after participating in the creation of 「15 Nightmares ~」. I asked Tohyama, a composer with whom I have a longstanding connection, to work on just one of the songs, which I think helped in bringing out more variety.

On possibly leaving videogames to work on anime and film

I had no intention to leave videogames (laughs) so perhaps it wasn’t quite properly communicated, but I did think about stepping away from doing hands-on work, like composing, arranging, and programming by myself so that I can concentrate more on director work or be in a producer role.

However, having so many people listening to my work in NieR, and receiving comments from people who want me to compose and arrange songs myself, my perspective shifted to wanting to be in a director role while composing and arranging songs as well.

From that flow of events, for Drakengard 3, my role was first and foremost Sound Director, and I asked a few composers to lend a hand while I composed and arranged songs myself, and I feel we were able to create a broad sound.

If there were to be another creative piece involving the Drakengard franchise, I would love to participate in it through the music. And, of course I want to take part in other videogames outside of Drakengard, too, and by working on music for anime and other video, the experience will be fed back into music creation for videogames to allowing for even better expression. I don’t feel like there is still more to say, so to speak, but there are many different things I still want to challenge.