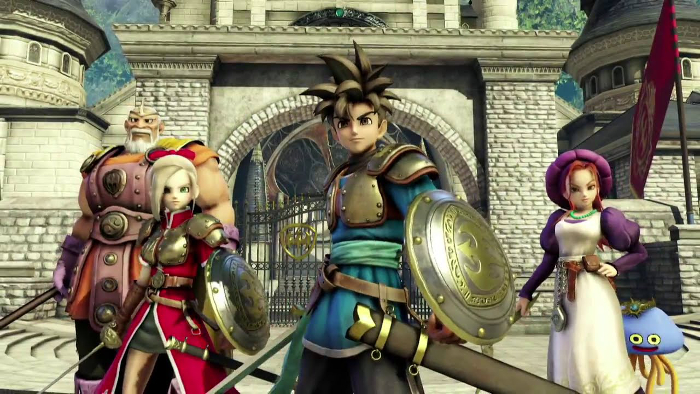 I’m a huge fan of Dragon Quest and the series music by Koichi Sugiyama. I also loved last year’s Hyrule Warriors, so I was looking forward to seeing and hearing the Dynasty Warriors formula applied to the Dragon Quest series. Would they take the route of including rock renditions of classic Dragon Quest themes to go along with the action, or would they adhere to the symphonic approach that the series has come to be known for?

While playing through Dragon Quest Heroes, every element drips with fan service, right down to the music and sound effects (some of the best in the business!). In the end, composer Koichi Sugiyama, who handled the music himself, opted for a classical style, arranging his themes from across the series using a synthesized orchestra library. While I would have loved to have heard some live music, the orchestral renditions contribute greatly to the waves of nostalgia that will hit players. The soundtrack is, of course, battle theme heavy, and Dragon Quest has some amazing battle themes. It was lovely getting to enjoy them once more while slashing through iconic Dragon Quest baddies, and the various town, castle, and other miscellaneous themes all fit together nicely into this package.

While I can’t say I know the music so well that I was able to pick out any new compositions, perhaps somebody out there will point them out if there are any. I’ve seen a lot of rumbling online about Square Enix’s policy about not allowing streaming of the game with the music on and wrongfully blaming Square Enix for this “ridiculous” policy, but in case any readers are finding this article because of that policy, I’d note that composer Koichi Sugiyama owns entirely the rights to his music, so the fact is that Square Enix can’t grant permission to streamers to play the game on live stream with the music on because it’s outside of their authority.

I’m guessing that even though most, if not all, of the music here is from previous games in the series, given that they’re new arrangements, there will likely be a soundtrack release. We can look forward to that along with the next Dragon Quest Heroes game!